High-speed production for the racing business 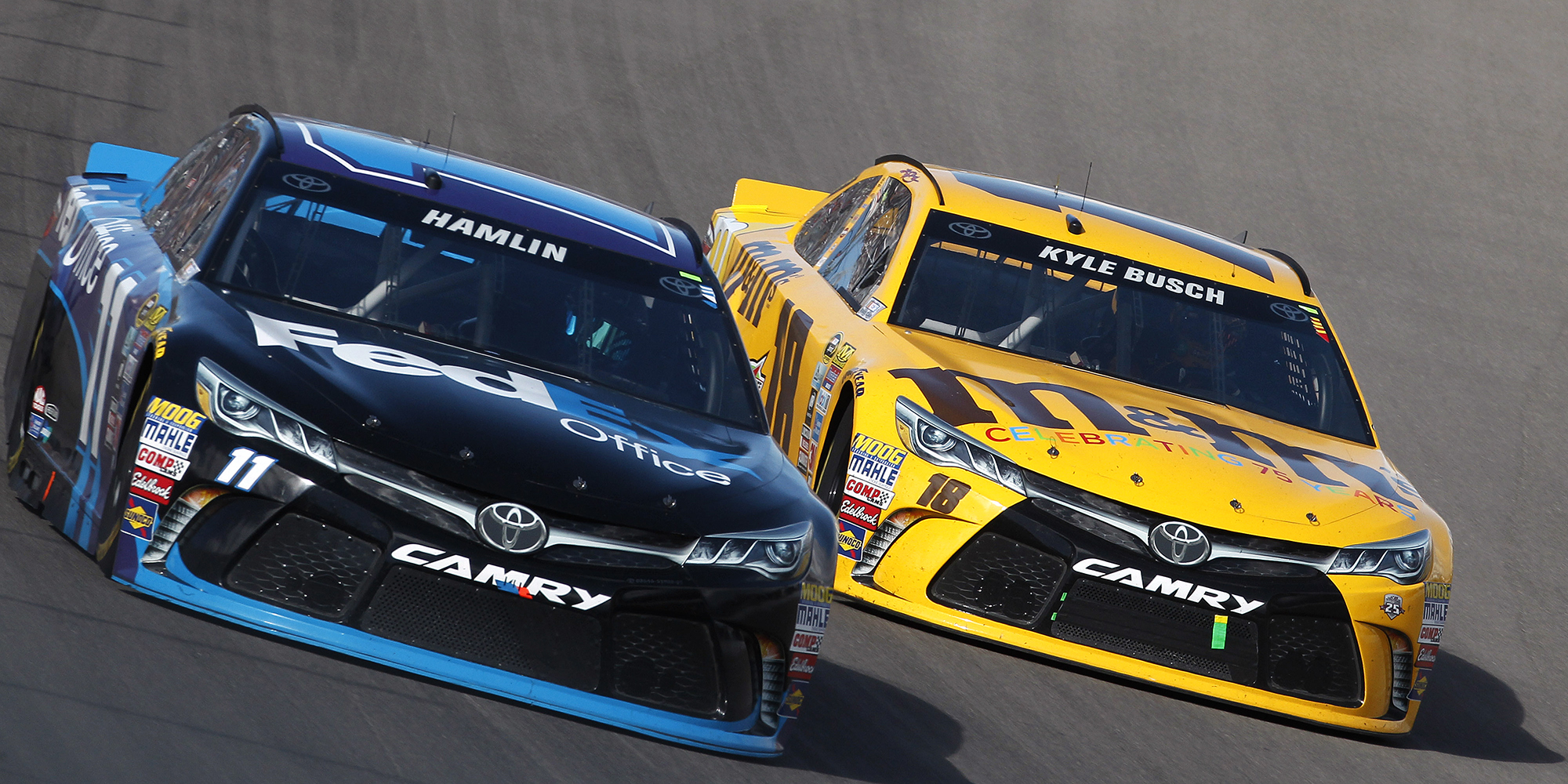 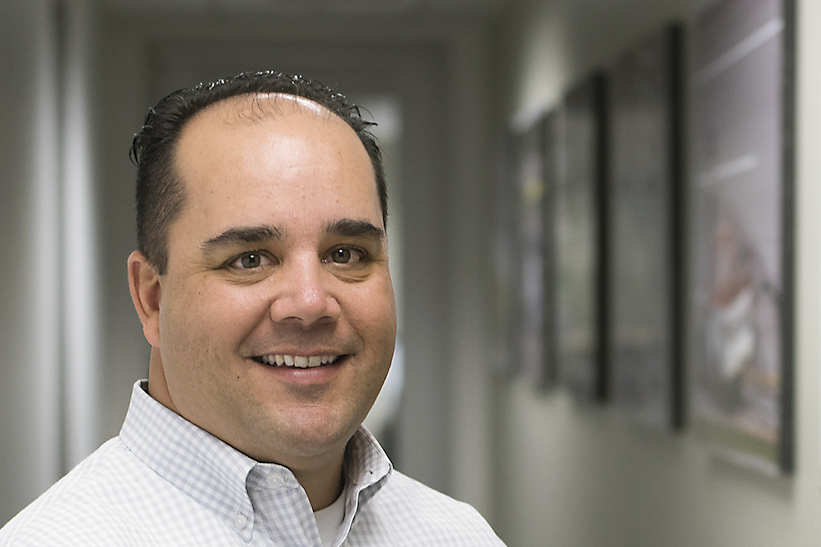 Greg Ozmai, Group Vice President of Operations of TRD: “We were impressed by the power and flexibility of the machines.”

As Group Vice President of Operations, Greg Ozmai is responsible for the internal and external supply chain at Toyota Racing Development. In this interview he explains why GF Machining Solutions is such an important partner for TRD – both today and in the future.

Mr. Ozmai, how did GF Machining Solutions contribute to the success of Toyota in the Monster Energy NASCAR Cup?

Our partnership with GF Machining Solutions, and the use of their technology, affords TRD the speed and flexibility to expedite development of our engines with greater speed and precision. Thanks to automation, we are able to reduce our component lead times and gain critical machining capacity utilizing full 24/7 manufacturing schedules.

What does GF Machining Solutions have to offer as a partner?

We attach great importance to direct and fast contact with our partners. GF Machining Solutions has shown particularly strong commitment here. We were impressed at how many of the division’s employees were involved in the development of our system and remain involved in our success. As our main contact partner, Martin Gorski understood the demands we face in the racing business right from the outset.

What does the upcoming season have in store?

In addition to the existing teams, we’ll be supporting a sixth Toyota Camry team in the 2017 Monster Energy NASCAR Cup. In other words, we need additional production capacity. We expect to continue to grow with the innovative technologies provided by GF Machining Solutions in the future. Additionally, we are currently considering new machines in the area of EDM technology and laser texturing.

In the American motorsports series, Monster Energy NASCAR Cup, it all comes down to speed – both on the track and in the production of the racing engines. In order to remain at the front, the manufacturer Toyota Racing Development (TRD) relies on fully automated production – which is enabled by GF Machining Solutions.

The smell of fuel is in the air. Roaring engines and fast cars chasing each other bumper to bumper at speeds of more than 340 km/h over distances of more than 500 miles: the Daytona 500 is the most prestigious race in the Monster Energy NASCAR Cup, attracting thousands of motor racing fans to Daytona Beach in Florida, USA, every year. Last season everyone was amazed by one particularly outstanding triumph: for the first time in the history of this famous motor racing event, it was won by a Toyota. And not just that: the drivers in second, third, and fifth position also crossed the finishing line in their Toyota Camrys fitted with TRD engines.

The 800 horsepower engines are manufactured by TRD in their Costa Mesa, California headquarters, where about 200 employees design and build race engines. For them, speed is not just crucial on the race track, it’s essential in the production of the engines and spare parts, too. After all, entire engines have to be delivered with strict and challenging time requirements each racing weekend to the NASCAR speedways all over the USA. A demanding task – which is why since 2014, TRD has opted for high-performance milling machines made by GF Machining Solutions. 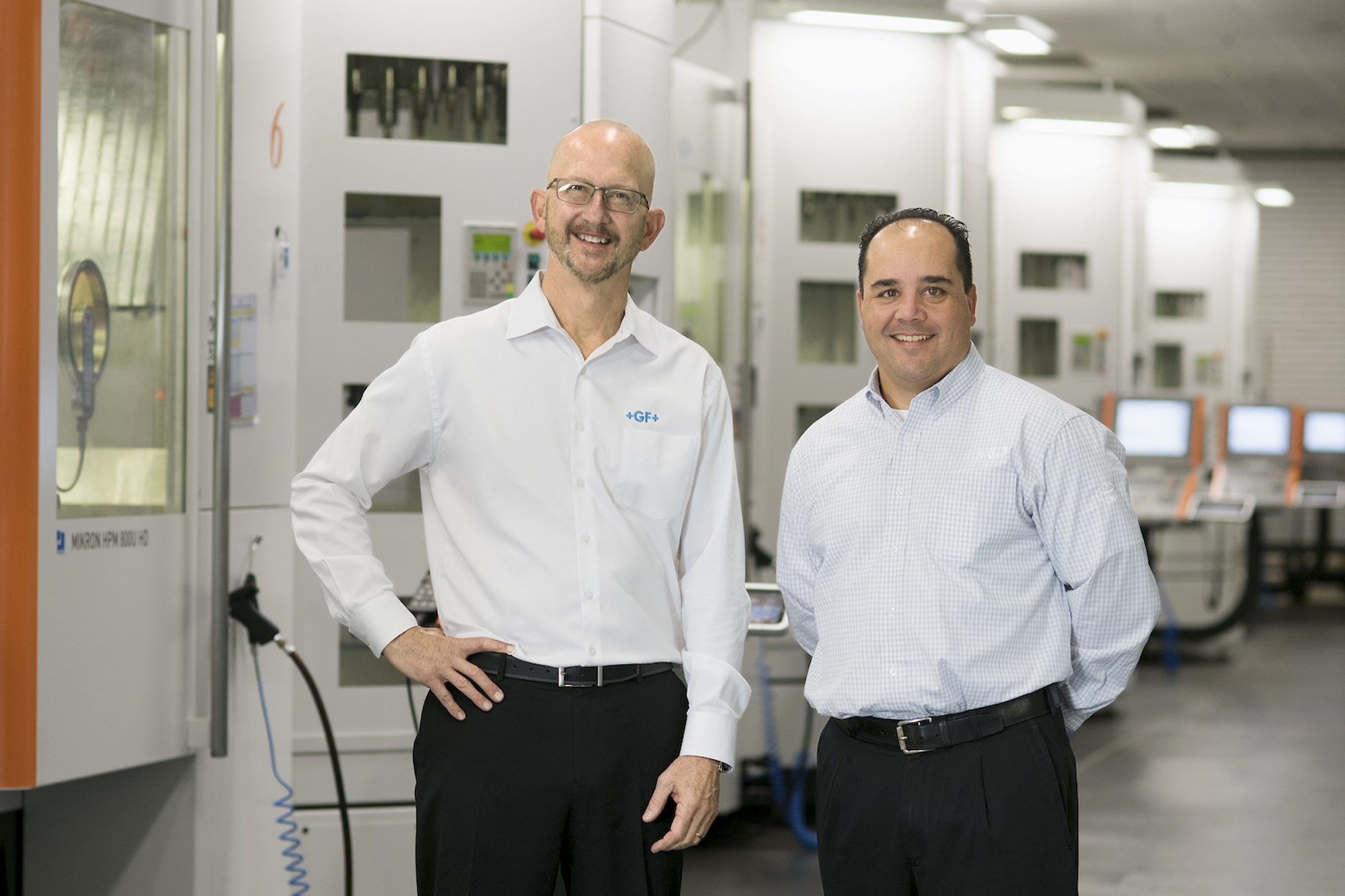 TRD runs eight GF machines in total: in a fully automated production cell, engine blocks, cylinder heads, pistons, and other engine components are milled by 5-axis machining centers of the type HPM 800 U as well as a larger HPM 1350 U. Thanks to the speed, flexibility, and precision of the production cell, TRD is able to turn out more than 400 engines per racing season.

Our solution enables the customer to constantly adapt to the dynamic requirements of the racing business.

“Our solution enables our customer to constantly adapt to the dynamic requirements of the racing business and meet the increasing demand for components at all times,” explains Key Account Manager Martin Gorski. This is confirmed by Greg Ozmai, Group Vice President of Operations of TRD: “We were impressed by the power and flexibility of GF’s machines.” At any time, for example, a machine can be taken out of the production line, so that it can be used for individual tasks.

The combination of high-speed machines and automation enables TRD to ensure constant production with maximum output. In the fully automated production cell, a robot loads the machines from more than a hundred open pallets running along a 32-meter track. The result: TRD has been able to increase its productivity by 22%. “Thanks to automation, our team gains additional capacity that we are able to reinvest in further development of our engines and components,” says Greg Ozmai. “And that’s something that can give our teams a decisive advantage on the race track.”

Not only the reliability of the machines was a key factor for TRD but also the close partnership with GF Machining Solutions. “TRD attaches great importance to a professional service team that responds immediately if required”, says Martin Gorski. The division’s site in Irvine is located barely more than about 20 minutes from TRD’s headquarters. “This means we can respond extremely quickly to the customer’s needs,” explains the Key Account Manager.

The new NASCAR season is due to start again soon – naturally, TRD and GF Machining Solutions are set on finishing right up front again.

Thanks to fully automated production, TRD is able to turn out more than 400 engines per racing season. 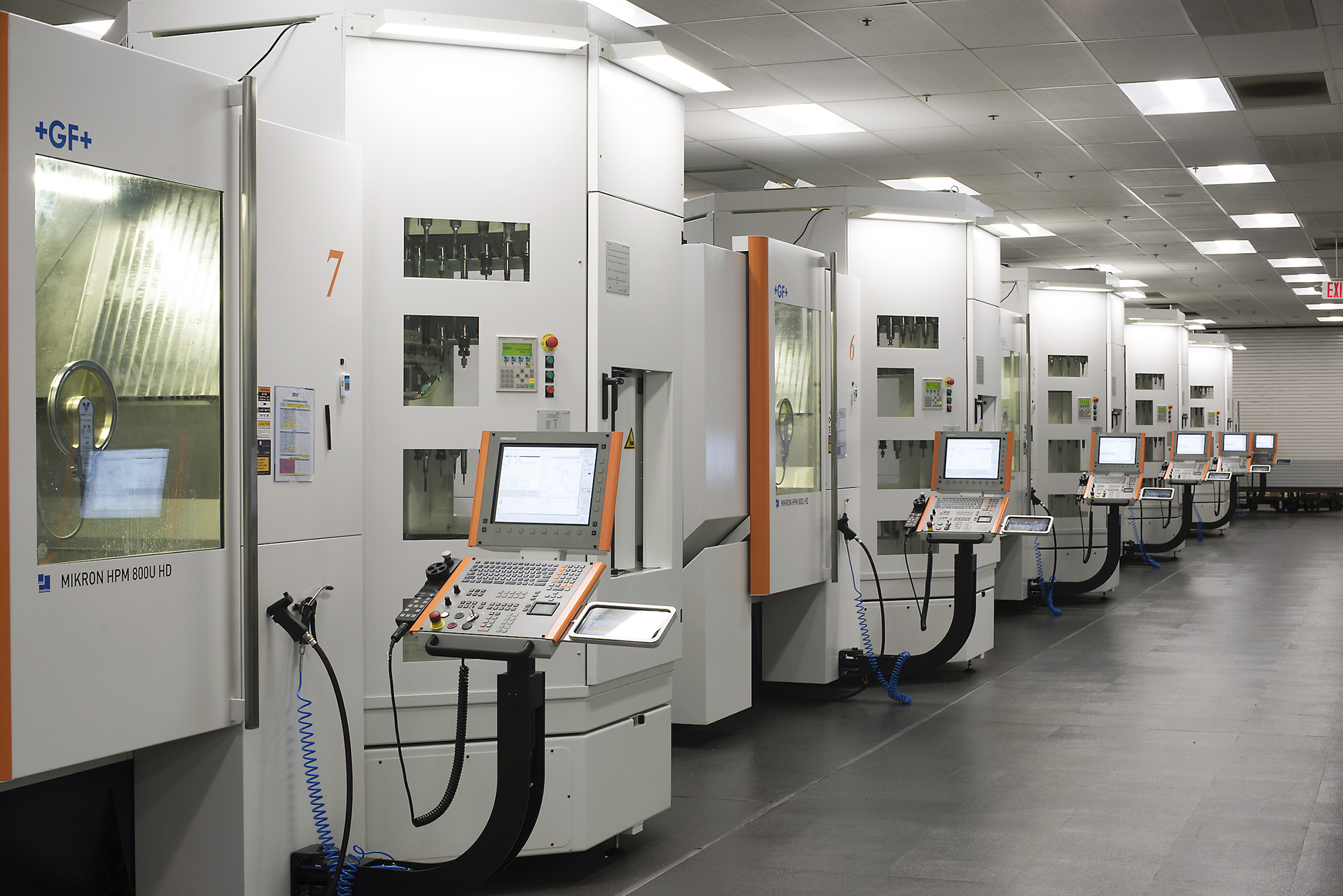 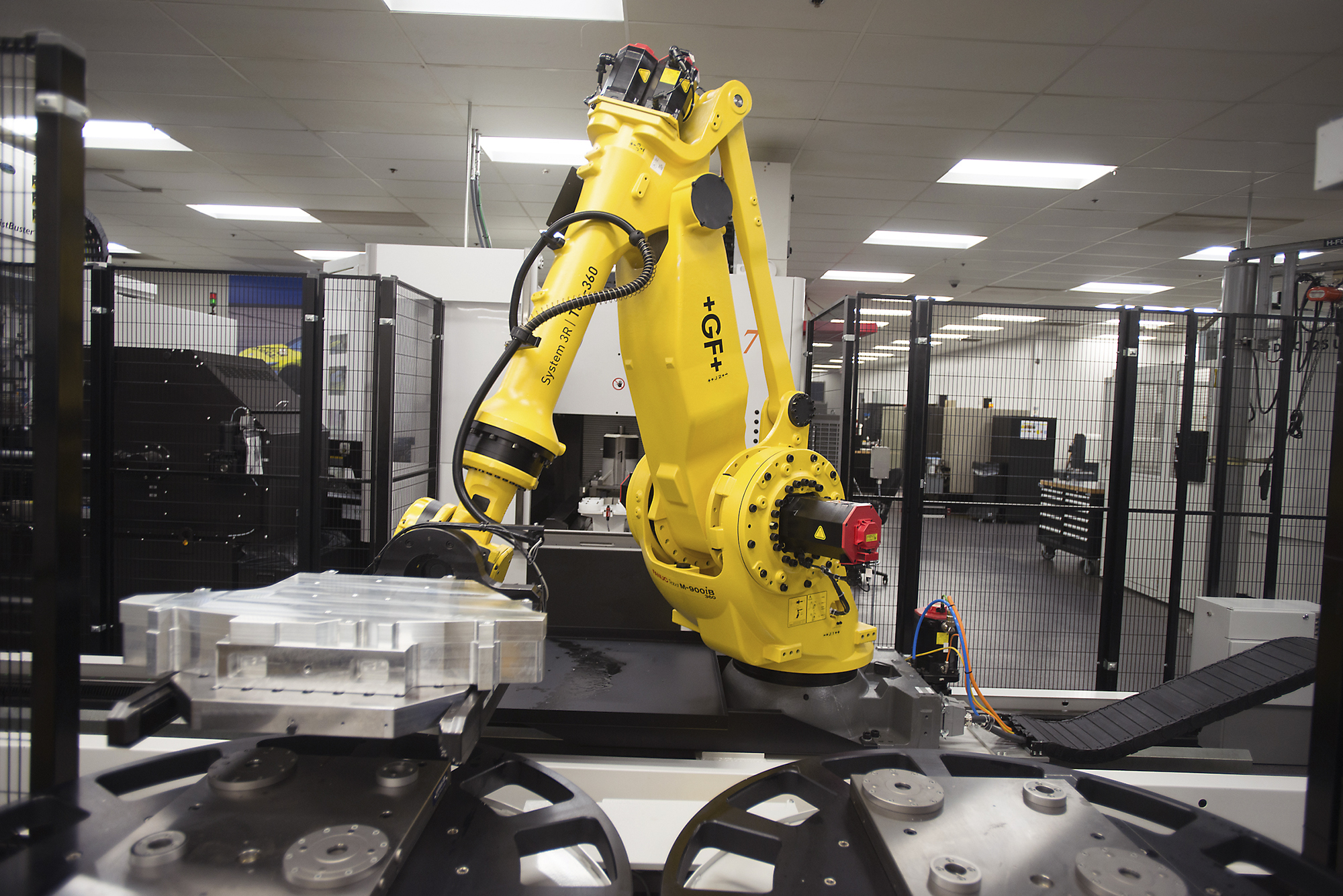 A robot loads the machines from more than one hundred open pallets.

Toyota Racing Development has been active in US motor racing for many years, and since 2007 has been one of three manufacturers in the Monster Energy NASCAR Cup series – the leading series of the American motor sports association NASCAR. In the 2016 season, TRD supplied five teams with engines and aerodynamic parts based on the Toyota Camry. It was the most successful season to date for TRD, with a total of 16 victories. TRD also won the manufacturers’ championship for the first time. The team particularly caused a stir at the most important race of the Monster Energy NASCAR Cup – the Daytona 500 in Florida: with four drivers among the top five, it was one of the most significant races in the history of TRD.

GF Machining Solutions is present in more than 50 countries to provide customer services locally. Production facilities as well as research and development centers are located in Switzerland, Sweden, and China.