Letter to the Shareholders

A further increase in performance 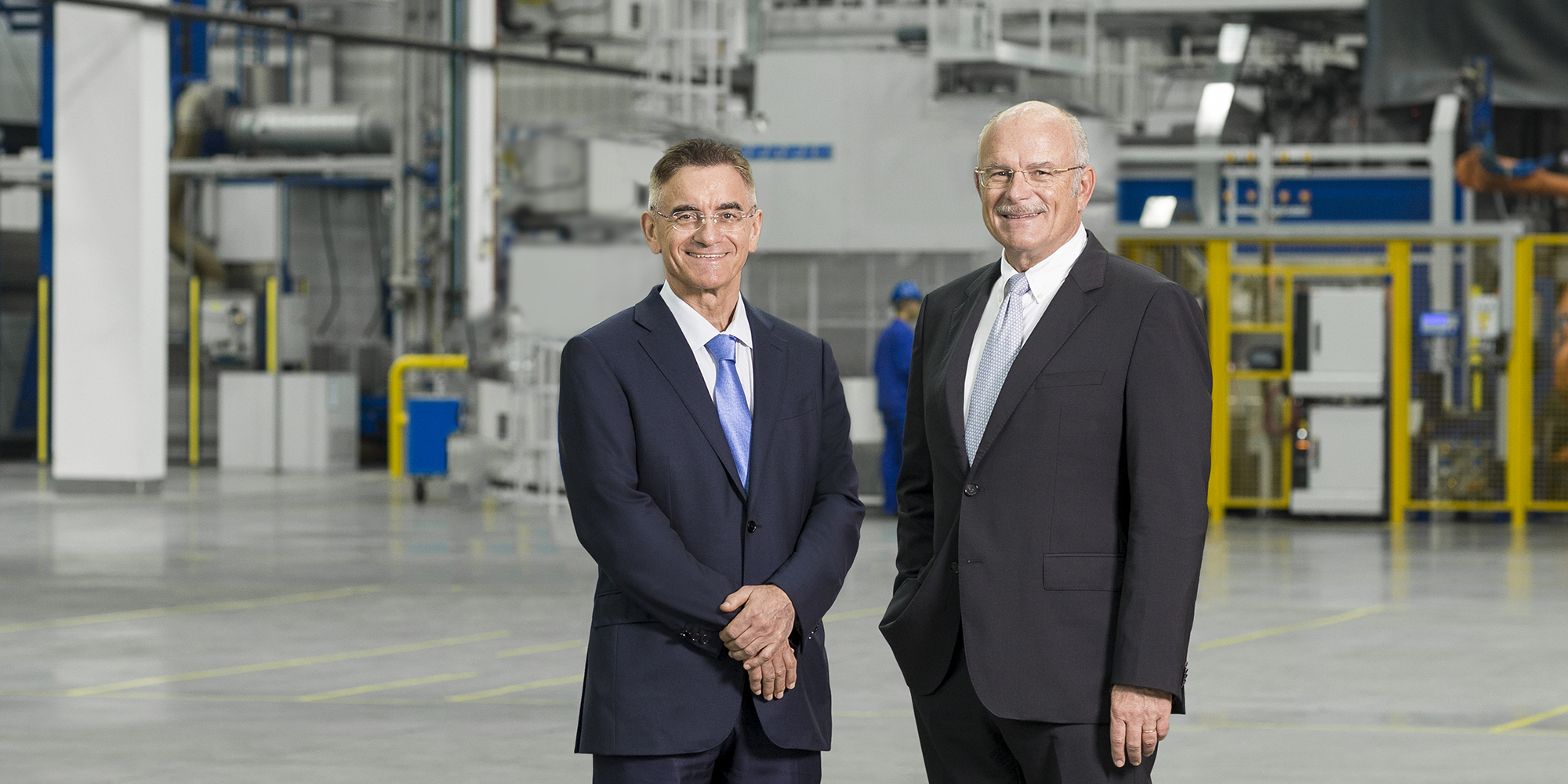 Yves Serra, President and CEO (left), and Andreas Koopmann, Chairman of the Board of Directors, at the GF Automotive plant in Suzhou (China).

GF has developed itself in 2016 fully in line with its strategic objectives 2016 –2020. Sales and profits increased anew and all three divisions generated value.

The Corporation has increased its sales by 3% to CHF 3ʼ744 million. In local currencies and adjusted for acquisitions and divestments, turnover growth amounted to 2%. The operating result (EBIT) rose to CHF 311 million, up 5% compared to previous year. This resulted in an EBIT margin (ROS) of 8.3% against 8.1% in 2015. The return on invested capital (ROIC) increased to 19.3%, up from 18.9% in 2015. All three divisions generated ROICs well above their cost of capital, thus creating a high amount of value for the company.

Net profit amounted to CHF 225 million, 14% above previous year, resulting in earnings per share of CHF 53 against CHF 46 in 2015. Free cash flow before acquisitions and divestments reached CHF 231 million, clearly above the already high level of the previous year (CHF 190 million). Based on the above, the Board of Directors proposes to the Annual Shareholders’ Meeting a dividend of CHF 20 per share (CHF 18 in 2016).

The operating result grew by CHF 19 million to CHF 162 million for a 10.8% ROS, against 10.1% in 2015. Well-loaded plants, including in Switzerland, and the strong growth in higher-margin businesses were the main factors behind this profitability increase.

GF Piping Systems acquired three companies during the year. In May, PT Eurapipe, Karawang (Indonesia), a manufacturer of polyethylene pipes and fittings, has been purchased to allow GF Piping Systems to set foot in this promising market. In August, GF Piping Systems acquired, through its Chinaust joint venture, two companies in China, Lingyun Jingran Gas Valve, which complements the divisional portfolio in the gas distribution sector, and Shuchang Auto Part, a supplier of plastic quick connectors for automotive fuel lines in cars and trucks. The integration of all acquired units is fully on track.

GF Automotive increased its turnover by 1% to CHF 1ʼ335 million. In local currencies, sales were at previous year’s level.

It is however to be noted that raw material prices, specially scrap iron, decreased substantially in 2016. As price fluctuations are contractually passed over to customers, this had a negative impact of ca. 3% on the GF Automotive turnover. Discarding this negative effect, sales volume in local currencies would have been up approx. 3%.

Both passenger cars and commercial vehicles demand remained overall healthy, particularly in China but with significant differences among car and truck manufacturers.

% return on sales for GF Automotive

The operating result amounted to CHF 100 million, a strong 12% increase to previous year resulting in a 7.5% ROS against 6.7% in 2015. Both Chinese plants as well as most light metal plants in Europe were fully utilized amid a high demand for aluminum components, including more and more for electric cars. The load of the European iron casting plants remained at previous year’s level.

In the USA, the construction of the new light metal plant in Mills River, North Carolina, is proceeding according to plan for a start of production at year-end 2017.

Amid uneven markets, GF Machining Solutions increased its turnover by 2% to CHF 916 million. In local currencies and adjusted for acquisitions, sales stood at previous year’s level. GF Machining Solutions enjoyed a healthy demand in the aerospace and medical fields, whereas the electronics sector in Asia remained flat in part because sales of electronic devices did not grow as fast as in the recent past.

The operating result reached CHF 62 million for a 6.8% ROS, supported by an increased focus on higher margin products. In 2015, the operating result of CHF 78 million had been boosted by the sale of an administrative building in Geneva, which added a one-time CHF 18 million to it.

In May 2016, the division acquired Microlution Inc. based in Chicago (USA), widening its technology portfolio in the promising field of micro-machining to support its customers’ precision needs in the medical, aerospace, and electronics sectors.

GF kept expanding in growth markets with two acquisitions in China and one in Indonesia for GF Piping Systems. At the same time, productivity optimization is proceeding apace in Europe where the commissioning of a new automatized molding line has been started in Singen (Germany), and a high number of automation projects have been implemented in the other plants of GF Automotive.

The shift to higher-margin businesses is also on track with the entry at GF Piping Systems into new sectors like air-conditioning and the push at GF Automotive into electric car components. In addition, GF Machining Solutions has significantly expanded its offering and its sales in the growing aerospace business.

Finally, specific training programs are being conducted corporate-wide in order to accompany this shift, on one hand to accelerate customer-focused innovation and on the other hand to further enhance sales proficiency.

In April, GF successfully issued a CHF 225 million bond over ten years with a 0.875% coupon to replace a CHF 200 million bond, placed in 2010 with a 3.375% coupon. This new bond issuance supports the financing of future acquisitions and at the same time allows GF to reduce its financing costs.

Recent economic and political developments may add more uncertainty and volatility to our markets. We believe, however, that new businesses and recent acquisitions will support growth at GF Piping Systems. GF Automotive and GF Machining Solutions enjoy promising order backlogs in their core segments and the focus at all three divisions on higher-margin sectors starts bearing fruits. Based on today’s evaluation of the overall business environment, we therefore expect for 2017 to increase results anew, in line with our 2016–2020 objectives.

Changes in the Board of Directors

At the Annual Shareholders’ Meeting of March 2016, Ulrich Graf left the GF Board upon reaching the mandatory retirement age. Ulrich Graf served on the GF Board for 18 years during which GF benefited from his vast experience as CEO and Chairman of several listed Swiss companies. Ulrich Graf also served as Chairman of the GF Compensation Committee from 2010–2016. We thank him very much for his long-lasting commitment and very valuable contributions to our company. At the same meeting, Riet Cadonau has been elected as new Board Member.

Our heartfelt thanks go to our employees for their commitment and collaborative spirit.

A great collaborative spirit to better serve our customers

Despite volatile and uneven markets, we achieved growth and financial results in line with our 2020 strategy. Our heartfelt thanks go to our employees for their commitment and collaborative spirit. This great teamwork across borders and various cultures, nurtured over the years, has been a key factor behind the best successes we have had, owing to a better understanding of and a quicker response to our customers’ needs.

We have enjoyed working hand in hand with our customers whose feedback and ideas guide our innovation and service efforts. We are also very much honored and motivated by the trust placed in our company by our mid- and long-term as well as new shareholders. 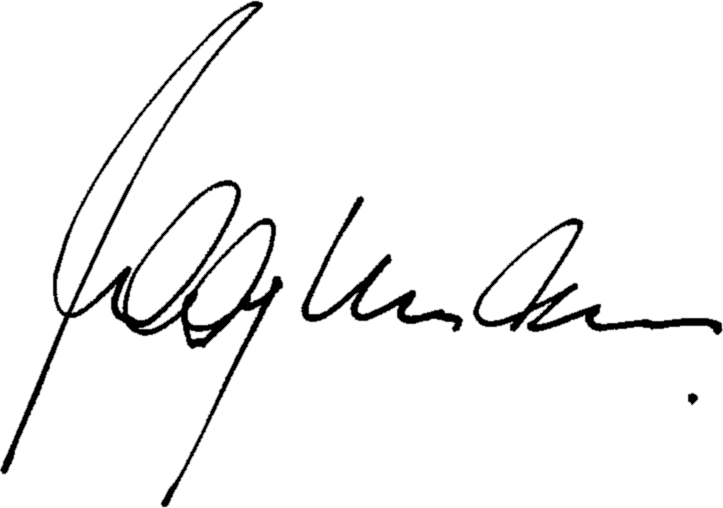